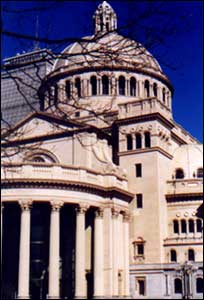 Part 1 - The Back Bay, Copley Square, and the Avenue of the Arts

The Boston neighborhood known as the Back Bay was developed in the 19th century on land reclaimed by one of the largest landfill operations ever undertaken in this country. Starting in 1857, an extremely elegant residential and commercial district developed to the west of Charles Street and the Public Garden where before there had been water, marshes and swamp. Taking its inspiration from the broad boulevards of Paris, this charming quarter of Boston was quick to become the home for fashionable Bostonians. Commonwealth Avenue, the main thoroughfare, was heralded by Sarah Bernhardt as the "Champs Elysées of America," and is lined with public monuments to many prominent Boston residents set along its mall. Grander and more exuberant than the quiet elegance of Beacon Hill, this neighborhood contains an impressive sampling of late 19th century architecture and style. 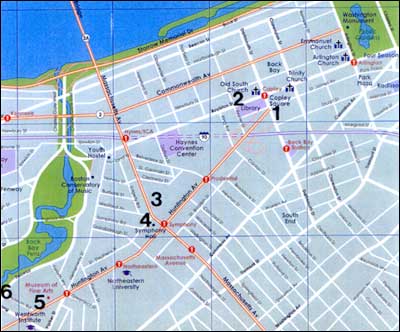 From the Public Garden, follow Commonwealth Avenue to Dartmouth Street, turn left, and proceed to Boylston Street, arriving at the corner of Copley Square [1]. The square has always been a busy confluence of major streets in Boston and it is the home of some of this city's most significant public architecture: Trinity Church (1872-77), the New Old South Church (1874), the Boston Public Library (1887-95), and the Copley Plaza Hotel (1912). Each of these sites is historically and artistically significant and provides a rich insight into the tastes and temper of Victorian Boston.

Of particular significance for Cather would have been the Boston Public Library [2], designed by McKim, Mead and White as the permanent home for America's first public library and as an expression of the grandeur and accomplishment of architecture, painting and sculpture in America. In it is an allegorical cycle of 8 murals by Puvis de Chavannes, entitled "The Muses of Inspiration Hail the Spirit of Light." Like the murals depicting the life of St. Genevieve that Cather had seen in the Pantheon in Paris, these panels demonstrate the simplification of form and delicate balance that Cather admired as she worked on Death Comes for the Archbishop. As part of a comprehensive restoration of the Library building, the Puvis panels, as well as other mural cycles by Edwin Austin Abbey and John Singer Sargent, have been cleaned and stabilized, and may now been seen in very much the same condition as Cather would have encountered them almost 100 years ago.

Several blocks from Copley Square along Huntington Avenue is the Christian Science Center [3], site of the Mother Church of Christ, Scientist, and the primary reason Cather had come to Boston. The Romanesque edifice of the Church was dedicated in 1894 and was extended in 1906. The library was built 1932-34. In the fall of 2002, the Center completed a significant restoration of what is now called the Mary Baker Eddy Library for the Betterment of Humanity, which provides scholars with greater access to the Church's collections. Although the Church rejects the Cather work on Eddy, their archives include a "Milmine Collection," containing three different sets of manuscripts related to the publication of the biography in book form.

Across from the Christian Science Center is Boston Symphony Hall (1900) [4], an exceptional venue that will recall the scene of Aunt Georgiana's emotional response to the Boston Symphony Orchestra's program in "A Wagner Matinee." Further along Huntington Avenue is the Museum of Fine Arts [5], noted for its outstanding collections, especially of the French Impressionists and of American art. Nearby on the Fenway, is the Isabella Stewart Gardner Museum (1903) [6], housing the collection of Mrs. Jack Gardner, Boston's controversial patron of the arts at the turn of the century. All of these sites provide unique opportunities to consider the Boston as Cather encountered it and will stimulate a broadening understanding of the fullness of Cather's kingdom of art.

Other Points of Interest

(one or two days depending on time spent in museums)

New Old South Church, 645 Boylston Street. This building is a fine example of Ruskinian Italian Gothic design. Notable among the interior features are Venetian mosaics, and stained-glass windows of 15th century English style. The sanctuary was completely renovated in 1985. www.oldsouth.org

Boston Symphony Hall, Massachusetts Avenue at Huntington Avenue. Hours: tours given on the first Saturday of each month at 1:30 and Wednesdays at 4:30, through the end of May. Performances by the Boston Pops Orchestra will be given May 7 to July 6, 2003. www.bso.org

Isabella Stewart Gardner Museum, The Fenway. Hours: T-Su, 11-5; Admission: $10. Fenway Court, Gardner's home, is styled as a 15th century Venetian palace and contains an extraordinary collection of European and American masters. Altogether, the works provide a fascinating look at personal collecting in the late 19th and early 20th centuries. This year (2003) is the museum's centennial year, so special exhibits and concerts have been planned. www.gardnermuseum.org

A Day in Cambridge. Scholars may want to use this opportunity to visit the Houghton Library of Harvard University, which has Cather letters among its extraordinary collections. Houghton Library, Harvard Yard, Cambridge, Hours: M-F, 9-5, Sa, 9-1. www.hcl.harvard.edu/houghton