The major part of this tour centers in and around Washington Square and includes a sampling of sites of historical, architectural, and literary importance. However, there are sites listed that no longer remain in their original state. For example, New York University's Kimmel Center occupies the site of Cather's first residence at 60 Washington Square South. A few may not seem to bear a direct connection to Cather, but because they have been preserved largely in their original state, offer a sense of the Village ambience as she knew it. In some cases, several sites are included under one listing. The first site listed, Grace Church, is located in the East Village, as the area east of Broadway is known. The last, 5 Bank Street, is located in the area west of Sixth Avenue (Avenue of the Americas) which is also referred to as the West Village. A charged atmosphere of artistic creativity, political reform, and diversity characterized the bohemian Village of Cather's day. Like many neighborhoods in New York City, then and today, rich and poor co-existed in close proximity to each other. In Cather's "Coming, Aphrodite!," aspiring artists Don Hedger and Eden Bower sublet their respective rooms on the less fashionable south side of Washington Square while across the Park on the north side, the well-to-do lived in their stately Greek Revival townhouses. 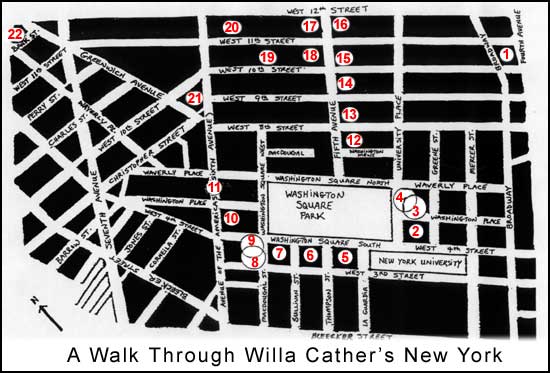 Grace Church (Episcopal), 800 Broadway, corner of E. 10th Street, a Gothic Revival structure designed by James Renwick, Jr., and built in 1847, then one of the most affluent parishes in NYC. In Cather's My Mortal Enemy (1926), one of Myra Henshawe's many social pretensions are revealed whenshe chooses to have her husband accompany Nellie Birdseye and Aunt Lydia for the Christmas service there during their New York visit. In Edith Wharton's novel, The Age of Innocence (1920), Newland Archer and May Welland marry there as was the custom for members of their aristocratic social circle. Wharton lived briefly at 7 Washington Square North; her grandparents lived on Mercer Street. "We were going to Grace Church, and the morning was so beautful that we decided to walk." (Cather, My Mortal Enemy) 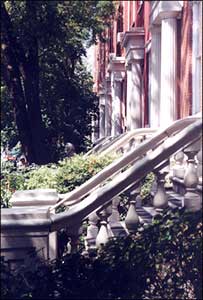 Birthplace of Henry James, 21 Washington Place, in 1845 when it was a very fashionable area. James' maternal grandparents lived at 19 Washington Square North, one of a two-block stretch of Greek Revival structures still standing, all "very solid and honorable dwellings," around the corner from "the more august precinct of the Fifth Avenue," as he writes in Washington Square. Cather greatly admired every aspect of what she termed James' "masterly prose," and his influence is apparent in many of her early short stories and Alexander's Bridge.

The Asch Building, as it was originally called, 22 Washington Place, the site of the Triangle Shirtwaist Company fire where 147 workers, mostly women, perished in 1911. The tragedy led to major reforms in New York City's building codes.

"She had an apartment in a decent enough house on Waverly Place ... She worked in a shirtwaist factory." (Cather, "Scandal")

"Don Hedger had friends among the silk-skirt factory girls who came to eat their lunch in Washington Square." (Cather, "Coming, Aphrodite")

The entrance to NYU's Main Building, built in 1895, 100 Washington Square East (University Place) between Waverly Place and Washington Place, facing Washington Square Park, a public park since the 1820's. The park site, at one time marshland with Minetta Brook running through, was converted to a potter's field and a hanging gallows prior to its reincarnation as a park. All the streets adjacent to the Park bear two names: Washington Sq. East=University Place; Washington Sq. North=Waverly Place;Washington Sq. West=MacDougal Street; Washington Sq. South=4th Street. Within the Park is the statue of Garibaldi who lived in NYC in exile in the early 1850's. The statue was erected by Italian immigrants who began to populate the area south of the Square in the late 1800's. Also within the Park is the Memorial Arch, originally in wood, designed by McKim, Mead and White in 1889 to celebrate the centenary of George Washington's inauguration.

"This spot, at least, had changed very little, {Eden Bower} reflected; the same streets, the same fountain, the white arch, and over yonder, Garibaldi, drawing the sword for freedom. There just opposite her was the old red brick house. . . . From somewhere in the crowded quarter south of the Square, a flock of pigeons rose, wheeling quickly upward." (Cather, "Coming, Aphrodite")

Cather's first Village residence (1906-1909), 60 Washington Square South (4th Street beween LaGuardia Place and Thompson Place), next door to "House of Genius" at 61, so-called because many writers lived there including Frank Norris who like Cather was invited to work at McClure's Magazine (a literary and political publication founded by Samuel McClure in 1893). Edith Lewis worked at McClure's as a proofreader and roomed in the same building. Cather biographer James Woodress reports that she first met Lewis in Lincoln, Nebraska, in 1903.

"Don Hedger had lived for four years on the top of an old house on the south side of Washington Square." (Cather, "Coming, Aphrodite")

Judson Memorial Baptist Church, 51-55 Washington Square South, Campanile (bell tower) and Hall (at one time Hotel), constructed in the 1890's by McKim, Mead and White in Greco-Romanesque style. Its stained glass is by John LaFarge, who resided in the Village along with other artists of the Hudson River School.

Residence of Lincoln Steffens and John Reed, 42 Washington Square South. Steffens was a muckraking journalist and author, and Reed, a journalist and staff member of The Masses, a radical magazine. Steffens left his position at McClure's in 1906, shortly before Cather began there. Woodress notes that Cather had no interest in radical politics, and her only tie with such neighbors would be "her tolerance for a variety of life styles."

Provincetown Playhouse, 133 MacDougal Street, opened in 1918 and produced early plays by Eugene O'Neill, who resided at several Village addresses. O'Neill reputedly spent his days writing in a saloon on Sixth Avenue and 4th Street nicknamed the "Hell Hole," said to be the model for the setting of The Iceman Cometh. In her memoir of Cather, Elizabeth Singer Sergeant writes that Cather wouldn't consider seeing O'Neill's plays because her taste was offended by his "stark revelations" of extreme emotions and states of being. Another Provincetown member and Village resident was Edna St. Vincent Millay, who first appeared there as an actress and later performed in her own play, Aria da Capo.

Cather's second Village residence (1909-1913), 82 Washington Place, between Sixth Avenue and Washington Square West. In 1912, Cather published Alexander's Bridge after it appeared in serial form in McClure's, where it was entitled Alexander's Masquerade. The publication of O Pioneers! followed in 1913.

Brevoort Hotel, Fifth Avenue at 8th Street, northeast corner, once a gathering place for New Yorkers of an artistic bent who frequented its basement "Parisian" cafe. Eden Bower and Don Hedger eat there in "Coming, Aphrodite." (Fifth Avenue divides East and West numbered streets.) "Looking up the Avenue through the Arch, one could see the poplars with their bright, sticky leaves, and the Brevoort {Hotel} glistening in its spring coat of paint, and shining horses and carriages, - occasionally an automobile." (Cather, "Coming, Aphrodite")

Mark Twain residence, 21 Fifth Avenue (east side), one of several Village addresses of Mark Twain in the early 1900's. While still living in Pittsburgh, Cather was invited (probably by Samuel McClure who was a friend of Twain's) to attend a 70th birthday celebration for Twain, but their acquaintance began when they were both Village residents. In a 1925 preface to an edition of stories by Sarah Orne Jewett, Cather reserved her highest praise for three American novels: Nathaniel Hawthorne's The Scarlet Letter, Twain's Huckleberry Finn, and Jewett's The Country of the Pointed Firs.

The Grosvenor Hotel, 35 Fifth Avenue at 10th Street (east side), Cather's fourth and last Village address (1927-1932). Edith Lewis reports that in contrast to the "high vitality" and "great momentum" marking Cather's artistic endeavors in the Bank Street years, "that momentum was checked - never again to regain its former drive" during the period of hotel living which coincided with great personal losses for Cather. Nonetheless, Cather wrote Obscure Destinies, Shadows on the Rock, and the essay, "A Chance Meeting" while living here.

Church of the Ascension (Episcopal), Fifth Avenue at 10th Street (west side), where Cather was a member; the first church (1841) built on Fifth Avenue, original design by Richard Upjohn; tower modeled on that of Magdalen College, Oxford, England by architect Joseph Wells. As Edith Lewis notes, Cather loved its "altar with John LaFarge's great fresco above." In Cather's short story, "The Diamond Mine," diva Cressida Garnet's plans include doing over her "Tenth Street house" and being "married in the Church of the Ascension." 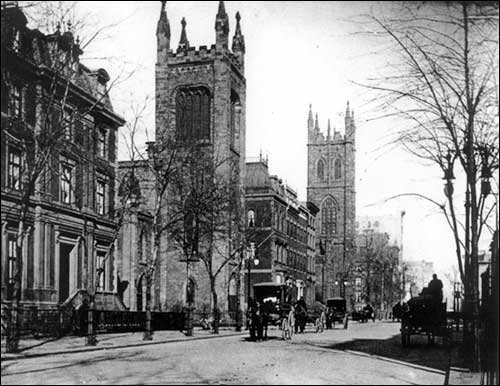 Italianate brownstone mansion, 47 Fifth Avenue, a rare extant example of those that once lined lower Fifth Avenue; built in 1853 for the president of the Pennsylvania Coal Company, Irad Hawley; since 1917, site of the Salmagundi Club, founded in 1871 to promote "social intercourse among artists and the advancement of art." Among its members were John LaFarge, Louis Tiffany, and Stanford White. Theodore Dreiser resided there at one point. The club's name derives from a satirical set of pamphlets entitled Salmagundi founded by Washington Irving and his brothers in 1807.

Cather's third Village residence (1913-1927), 5 Bank Street, between Waverly Place and Greenwich Avenue, Cather's longest Village residence. Greenwich Village was settled in the 1790's when New York residents sought to move "uptown" to escape epidemics of yellow fever, smallpox, and cholera. Bank Street acquired its name when Wall Street banks and other businesses followed in the area. Cather had her residence here during the years in which she wrote The Song of the Lark, My Antonia, One of Ours, A Lost Lady, The Professor's House, My Mortal Enemy, and Death Comes for the Archbishop, among other works. In 1927, the house was torn down. The site is now occupied by an apartment building where the Willa Cather Pioneer Memorial placed a commemorative plaque in 1975.

"We were delighted with the spaciousness and fine proportions of this apartment, so different from the boxlike place we had on Washington Place."

"We had very little furniture . . . but at auction rooms on University Place we bought mahogany chests and a round mahogany dining-room table for a few dollars. . . . Willa Cather found a large etching, by Courture, of George Sand, and had it hung over the fireplace in the living-room."(Edith Lewis, Willa Cather Living)