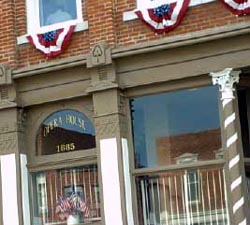 Architectural detail from the renovated Opera House. by Michael Schueth

The Willa Cather Pioneer Memorial celebrated the completion of the renovation of its new headquarters last May. The 1885 Opera House was donated to the WCPM in 1991 by the Frank Morhart family and features a restored auditorium, a large new Visitor's Center and bookstore, an art gallery, and administrative office space.

Mirroring Cather's own experience at the Opera House, those on hand for the event attended a matinee performance of James Ford's and Ariel Bybee's University of Nebraska-Lincoln production of The Bohemian Girl. The musical was a nineteenth century favorite, and Cather saw it performed at the Red Cloud Opera House in 1888 by the Andrews Opera Company.

After the show, participants gathered outside the Opera House on Webster Street for the formal dedication of the new WCPM headquarters. On hand for the event were Nebraska Governor Mike Johanns, University of Nebraska Chancellor Harvey Perlman, Red Cloud dignitaries, benefactor Lucia Woods, members of the Cather Board of Governors, and WCPM Director, Betty Kort. Speakers addressed the importance of Cather's legacy to Red Cloud and how the Red Cloud Opera House particularly figured in Cather's life and in novels such as The Song of the Lark, My Ántonia, and Lucy Gayheart.

The Opera House is listed on the National Registry of Historic Places; its renovation was designed by Bahr, Vermeer, Haecker architects and the $1.7M renovation costs were funded by over 600 donors from throughout the United States.

As Cather suggests in her novels, opera houses played a key role in the social life of small prairie towns during the late nineteenth century, and the renovation of the Red Cloud Opera House suggests they may once again hold a similar role in the twenty-first century. The WCPM web site (full web address below) posts an updated schedule of performances at the Opera House, as well as information about on-going fund raising efforts to support the second phase of the project, which involves, in part, construction of the Cather Archives in the basement of the Opera House. In addition to work on the Opera House, four store fronts north of the Opera House will soon get a facelift as a result of a Red Cloud Economic Development Grant, which includes scraping, priming and painting the buildings in accordance to historical standards.

Visit the WCPM on-line at: http://www.willacather.org