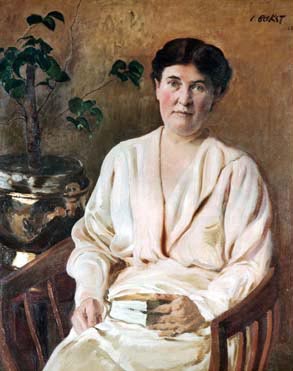 By Margaret Badollet Shotwell. Will Willa be Willa When Bakst gets thru basking? This is the question That Omaha's asking. Will Willa be soulful? Will Willa show guile? Will Willa be costumed In Bakst's Russian style? Since Omaha women Are paying the price, They're hoping and praying Bakst's Willa be nice. [In Omaha Daily News]

Margaret Badollet Shotwell's poem, "Will Willa?," which first appeared in the September 2, 1923, issue of the Omaha Daily News (5B) and was reprinted several weeks later in Publisher's Weekly (783), figures prominently in a controversy concerning the portrait of Willa Cather commissioned by the Omaha Society of Fine Arts to be hung in the Omaha Public Library.

A review of newspaper articles and correspondence among Cather, Shotwell (author of a weekly column for the Daily News called "Bibliophile by Badollet") and Duncan Vinsonhaler (an Omaha judge who promoted the portrait project and who was associated with the World Herald publisher Harvey New-branch) reveals that the Leon Bakst portrait of Cather incited a local controversy involving Cather's celebrity status and the jealousy of an Omaha newspaper columnist.

The correspondence from October 20, 1922, just after the publication of One of Ours, to early January 1924, is paraphrased in Janis Stout's book, A Calendar of the Letters of Willa Cather and in the Virginia Heritage's "Willa Cather Collection" in the Clifton Waller Barrett Library of American Literature, at the University of Virginia.

Newspaper accounts first appeared in two Omaha newspapers-the Omaha Daily News, the self-proclaimed "First in Evening Circulation," and the Omaha World Herald, a morning paper. Some indication of the reputations of the newspaper can be assumed by the example of their treatment of a news story which appeared on the front pages of each paper on July 16, 1923. The Daily News ran the story under a large headline across the top of the paper which read "Shoots Wife, Thinking Her Burglar." The World Herald ran the same story with a different headline near the bottom of the page, just above the weather.

The basic details of the portrait story are revealed in Edith Lewis's account in her book Willa Cather Living. According to Lewis, Cather was contacted by the Omaha Public Library in the spring or summer of 1923, indicating that they had collected money to have a portrait painted of her so that it could hang in the library. Cather was asked to choose the painter and, on the advice of friends, she chose Leon Bakst, who was at that time living in Paris (131). Bakst was a Russian portrait painter, graphic artist, lecturer, author, and influential set designer for Diaghilev's Ballets Russes. Cather had written "The Gold Slipper," an article about "Bakst's revolutionary impact on the fashions worn by wealthy women," which appeared in the January 1917 issue of Harper's (Duryea).

Lewis indicates that Cather did about twenty sittings with Bakst, and even though the sittings were delightful for Cather, "the portrait was a complete failure . . . stiff, dark, heavy, lifeless-everything that Willa Cather was not, and indeed, everything that Bakst was not." Lewis remembers that the Omaha Public Library people "behaved most chivalrously about it; it was unveiled and hung with appropriate ceremonies, and no word of complaint ever came to Willa Cather from them, although they must have been deeply disappointed" (132).

There is more to the story than Lewis's sketchy report. Even though Cather heard "no word of complaint" from the library people, she was definitely aware of the complaints stirred up by Shotwell, whose campaign to discredit Cather's choice of an artist and his painting of her received national attention with the publication of her poem in Publisher's Weekly. While the poem seems to be predicting dissatisfaction with the portrait by the people who commissioned it, it actually is responsible for creating a great deal of that dissatisfaction.

The story began when the three principal characters in the portrait controversy were linked to each other by letters. In October of 1922, Cather sent thank you letters to both Vinsonhaler and Shotwell. Cather's letter to Vinsonhaler refers directly to her appreciation of his writing to her about the book (Stout #631), and her letter to Shotwell thanks her for her good word (Stout #633). We may assume that the "good word" is in reference to the same book, One of Ours, and that there is no animosity between Shotwell and Cather at this time. In August of the next year, Mrs. Shotwell still seemed to be a Cather fan when she reprinted a favorable article on Cather, which was written by W. P. Edison, editor of the Webster County Argus at Red Cloud (7B).

Several days later, however, Shotwell sent a letter to Leon Bakst "requesting an interview on Willa Cather from a painter's viewpoint, with a list of questions" (Virginia Heritage). It appears that this letter to Bakst was responsible for the beginning of Cather's negative feeling for Shotwell because a few days later, in a letter to Vinsonhaler, Cather indicates her dislike for Shotwell when she says that she is dreading coming to Omaha, "where the aggressive Mrs. Shotwell lurks." Cather then refers to the questions that Shotwell has written for Bakst to answer as "entirely too personal and intrusive!" (Stout #693). Several weeks later, Mrs. Shotwell, apparently annoyed by Cather's influence on Bakst and his refusal to answer her questions, published the "Will Willa" poem in the Daily News (5B), and less than two weeks later it was reprinted in Publisher's Weekly. Between these two dates, Vinsonhaler received another letter from Cather referring to the rude letter from Mrs. Shotwell and enclosing it (Stout #700). That letter was followed by another written to Vinsonhaler by Cather, thanking him for his assurance "that people in Omaha pay no attention to Mrs. Shotwell" and referring to being moved by a column by Harvey Newbranch (Stout #702). Newbranch's column refers to an article Cather had published in The Nation and says nothing about the painting (10).

In this letter, Cather also refers to Mrs. Shotwell as that "'presumptious lady'" (Virginia Heritage). By this time Cather's new book A Lost Lady had been published and was selling well, and she told Vinsonhaler that it had been out for only a week and was already in its third printing (Stout #702). Mrs. Shotwell was not one of the book's fans, however. Her review of the book in her September 23, 1923, "Bibliophile by Badollet" column is not favorable. She says, "Had Miss Cather portrayed the conflict in Marian Forrester's soul it would have been a big novel. Lacking this, it is anti-climatic and mediocre" (10B).

Cather did not attend the December 30, 1923, unveiling and presentation of the Bakst portrait. In her absence, the painting was unveiled and presented at the Omaha Public Library by her niece, Mary Virginia Auld ("Picture" 1). Cather explains her reason for not attending in a letter to Vinsonhaler in early December. She says that these kinds of appearances take away from her time to write and that the public's "`well-meant intentions . . . simply wreck me,-just break the machine that makes it'" (Virginia Heritage).

During the ceremony the purpose of the portrait was expressed as, "To let young people know that recognition is given to art as well as to more material enterprises," and its reception by the committee was positive enough so that to emphasize that purpose, prints of it are sent to schools in the state ("Picture" 1).

The presentation and unveiling of the portrait did not put an end to the controversy, however, and on January 11, 1924, a story appeared in the Daily News under the Badollet byline and a headline that read "Pach, Art Critic, Thinks Little of Cather Portrait; Lecturer Says Bakst's Picture of Author Is Mediocre, Valueless; `Nothing Good About It'" (n. pag).

The next day the city editor of the Daily News sent Cather a telegram "revealing public criticism of Bakst's portrait of her and asking for her opinion" (Virginia Heritage). Cather responded immediately, "declining to make a statement" (Virginia Heritage). However, the following day, in both the World Herald and the Omaha Morning Bee, the same article, probably a press release promoting the lecture of Leon Bakst, who was scheduled to appear before the Omaha Society of Fine Arts on January 18, appeared ("Willa Cather" 1E; "Miss Cather" 3C). The article contains a long quotation from Cather emphasizing Bakst's talents as a scenic designer and portrayer of native art. Cather did not mention his portrait of her. The Daily News also ran the press release, but it appeared at the end of a locally written article attempting to keep the controversy alive. The complete headline of this article proclaims that "Bakst Appears to Be Placed in Most Peculiar Position; Has Requested His Portrait of Willa Cather Be Hung Above Platform on Which He Will Speak to Fine Arts Club; Picture Is Center of Bitter Criticism" (1D).

That same day Cather wrote her last letter to Vinsonhaler on the subject of the Bakst portrait, and in it she admits, "that the portrait has caused more anxiety and distress than any of her books" (Virginia Heritage). Vinsonhaler answered Cather, "`enclosing a record of the controversy over the portrait.'" He blamed "much of the bad publicity on a certain person [Margaret Badollet Shotwell], saying that it has stimulated great interest in Bakst's lectures, and advising her to ignore such adverse opinions and publicity" (Virginia Heritage).

The record reveals that Cather herself was unsure about how the people of Omaha would accept a Bakst portrait of her. In a letter to Vinsonhaler on August 1, 1923, she quotes Bakst as saying that he hopes his painting will be "'not only an external resemblance, but a psychological likeness'" (Virginia Heritage). As Duryea has observed, during his career as a painter Bakst "flirted with Constructivism and Cubism," and his portrait of Cather "reveals aspects of Cubism as the subject withdraws from the viewer, appearing reticent and retiring in a Cezannesque pose." In an August 11, 1923, letter to her friend Irene Miner Weisz, she indicates that Bakst is a modern painter, so the people of Omaha might not like the portrait (Stout #692).

Without the interference of Mrs. Shotwell and the Omaha Daily News, however, there probably would not have been a public controversy. According to James Woodress, Cather was right; the people of Omaha did not like the portrait, and neither did her friends and family. Woodress agrees that the "painting is not flattering," but he also agrees with Bakst's original hope of "a psychological likeness" when he observes that Cather "was a middle-aged woman going through a profound physical, emotional, and spiritual crisis" and that the painting "bares the soul of Professor St. Peter, whose similar problems Cather had already begun to describe" (339).

Today, the poem, letters, and newspaper accounts about the Bakst portrait of Willa Cather have faded into past, but the portrait itself has outlasted them all. For those who want to judge it for themselves, it can be viewed in the main branch of the Omaha Public Library in the administrative offices on the fourth floor.