Photos and Text by Kari Ronning 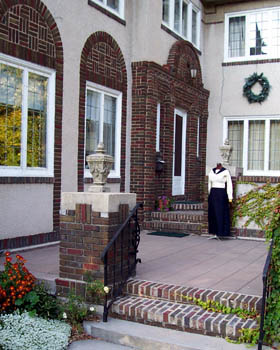 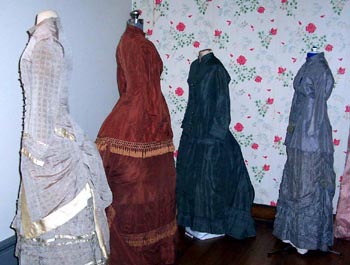 Although minute descriptions of clothing were part of the "furniture" of the novel which Cather tried to discard, undoubtedly her characters are dressed most of the time. Usually their clothing is suggested without being described. Cather could rely on her readers to visualize the clothing her characters would have been wearing, either because they had worn such clothes themselves, or they had seen their parents or pictures of their grandparents. Many of the suggestive references to apparel go unnoticed by readers now. For the October 2003 meeting of the Cather Colloquium, I drew on my collection of antique clothing to display styles from the 1880s and 1890s, the period of Cather's girlhood and the setting of many of her stories. I tried to match her references with similar items, like bonnets and kid gloves and kid curlers and cross-stitched aprons. The dressmakers' dummies in their costumes were arranged in a roughly chronological order, to give an idea of how the look of women's clothes changed in this brief period. A Catheresque middy-blouse and skirt, c. 1915-20, greeted members at the door (illus. 1).

The mid 1880s (illus. 2 and 3) was the era of the bustle and elaborate draperies and trimmings on skirts, like the "black silk dress all puffs and ruffles" (LL 39) Mrs. Forrester wears. The dress on the right in picture 3 is the plain, everyday version of this style, lacking trimming. On the right is a dolman wrap in a velvet brocade, like the "new cloak of the sleeveless dolman type, black velvet, lined with grey and white squirrel skins" (OD 92-93) which Mrs. Rosen brings back from Chicago. In the late 1880s and early 1890s (illus. 4) skirts became simpler but sleeves began to enlarge at the shoulders; the white lawn dress on the right is probably similar to the white dresses Mrs. Forrester wore in summer (LL 15 and elsewhere). Hanging on the wall are some of the "good supply of aprons" (OD 84) like those Mrs. Harris and old Mrs. Lee (OP! 171-72) took satisfaction in. 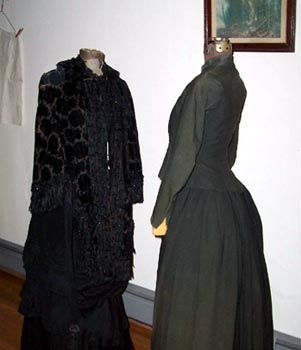 Illustration 5 is of an early 1890s dress in which "there seemed to be a piece of every known fabric in it somewhere" ( SOL 173), in this case, silk faille and crepe de chine, velvet brocade, cording, and paste jewels.

By the mid 1890s, sleeves had become enormous (illus. 6), like the one in which Cather posed for her graduation photo. Behind the child's dress is an unfashionable black calico everyday dress with a gathered skirt and plain sleeves, like the "full-gathered black dresses" (OD 110-11) Mrs. Harris and Mrs. Kohler (SOL 23) wear. Behind that is a white cotton nightgown.

Illustration 7 shows the smaller puffed sleeves of the late 1890s on the right, and on the left is a short velvet cape and bonnet like the "new spring bonnet, and . . . short black velevet cape, fastened at the neck with a bunch of violets" (LL 150) Mrs. Forrester wears late in the novel. On the wall are long and short baby clothes (see OP! 12) and a boy's knee pants, like the hapless Edwards's ("BY" 82). 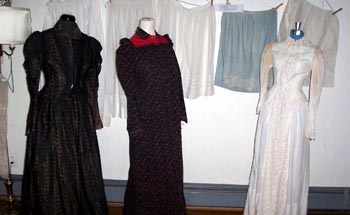 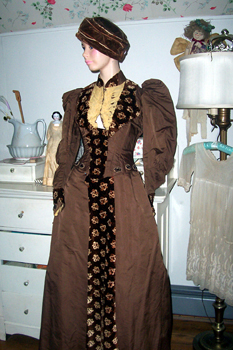 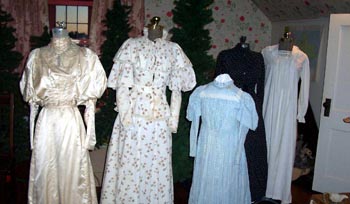 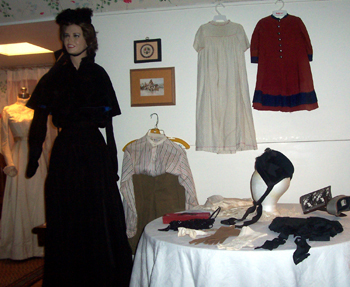