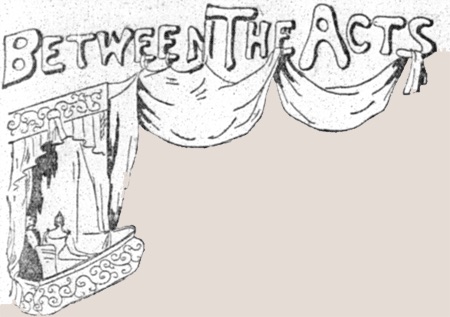 It is too bad that romantic ideals can never last in this world. The most un-matter of fact personage on the stage has been Elenora Duse . She was so white and distant and delicate that she hardly seemed a thing of clay, but someone apart engrossed wholly by art and consumption. The latest dispatches from Rome say that she stopped there on her way to Naples, and that she is fat and florid and has begun to lace and has to make up for her death scene in "Camille." German cabbages evidently agreed with the signora.

Among her many talents, Mrs. Kendal seems to have a remarkable faculty of calling forth the personal dislike and spleen of the public. As a rule the public accepts or rejects an actress or an artist, admires or dislikes her, as a woman, but it is seldom moved to strong personal feeling over her. The dislike of Mrs. Kendal seems to be universal, from her chambermaid to the people who sit in the largest boxes. The hotel people do not like her, all the dramatic critic in the country cordially detest her, and even photographers refuse to take her pictures because she is so hard to please.

Probably very few of the ardent admirers of Watts, the great English artist, or of Ellen Terry , the Shakespearean actress, know that in their youth those two tried to worship art and each other at the same time. The fact is Watts was the first of Miss Terry's many husbands. They were both very young at the time and had very little money and very large enthusiasm. They went, of course, to Italy. Love and consumption always go to Italy. They lived in Florence, and they both liked Royhead and they both liked Shakespeare and they fancied they liked each other. It was idyllic while it lasted, but it could not last long. The end came about in this way. One day Mr. Watts had a dinner for his gentlemen friends and Miss Terry was not to appear. But Miss Terry was not then the sober Shakespearified artist she is now, and she got very much bored waiting around upstairs all alone. She dressed up in her tights and adorned herself as cupid and went down into the dining room and danced for her husband and his friends. Mr. Watts was as near a Bohemian as an Englishman ever gets to be, but his pride and his sense of propriety never got over the shock.

Gilbert & Sullivan's new opera "Utopia Limited, or the Flowers of Progress," is being played at the Broadway theatre in New York with only moderate success. The general opinion is that the satire is overdone. The story tells of a certain King Paramount , the dusky ruler of an island in the south Pacific, who, having heard of the greatness and power of England, is desirous of remodeling the institutions of his kingdom and making its manners, customs, laws and dress conform to the English model. He is, however, embarrassed by the limitations put upon his power, he being under the necessity of acting in accordance with the wishes of two ministers of state, who practically control his acts. Should he displease these two magnates they have the power to denounce him to a dreadful functionary, the public exploder, whose duty will then be to blow him up with dynamite. These ministers compel him to write articles for the publication known as the Palace Peeper, in which, over various signatures, he is made to describe himself as a monster of immorality, and they likewise have compelled him to write a comic opera in which he is sadly travestied. The king in his state of perplexity is eagerly awaiting the return of his daughter, the Princess Zara , who has been educated in England, and is a model of learning, virtue and culture. His two other daughters have been educated at home by an English governess upon the strictest principles. Zara returns, bringing with her as exponents and exemplars of British institutions a lord chamberlain, a naval captain, a company promotor, a queen's counsel, a country councillor, and a Captain Fitzbattleaxe of the First Life guards, with an escort from that regiment. These are "the flowers of progress," the types of the highest civilization the world has ever known, and with the efficient aid the princess hopes that the regeneration of her native land may be speedily accomplished. The company promotor soon evolves a scheme by which the government of the land is committed not to an individual, but to a company, "Utopia Limited." The English visitors are installed in office, much to the discontent and disgust of the king's former ministers. King Paramount is, however, delighted, and desires to celebrate the new era by court ceremonies, among them being a state council and drawing room. The council is convened and conducted upon the plan of a minstrel entertainment in which the several ministers play upon various musical instruments and the king acts as interlocutor. His majesty has, however, a suspicion that the affair is possibly not exactly in perfect form, but is reassured by his new ministers that councils in England are conduced in precisely this fashion. In the meanwhile Princess Zara and Captain Fitzbattleaxe have mutually fallen in love, and everything wears the rose tinted hues of prosperity and success. Beneath the surface, however, the caldron of discontent is simmering. The people are not satisfied with the new era of prosperity and happiness. Those who trade upon the follies and vices of mankind have no field of labor. Prisons and workhouses are empty, the doctors have, in a double sense, lost their patients, speculators and financiers are idle, and in order to prevent a threatened revolt the princess suggests that there is one English institution, hitherto not copied in this regenerated kingdom, that will set all matters right, and that is party government. Anxious to avert the threatened danger, the king at once adopts the system. Thereupon his late ministers wish to denounce him to the public exploder, but he defies them and calls their attention to the fact that they no longer have to deal with an individual, but with a company, to the board of directors of which he flippantly refers them. He bestows the hand of the Princess Zara upon Captain Fitzbattleaxe, his two other daughters likewise find English husbands, and the king proposes to the governess, for whom he has long cherished affection and whose ready assent is scarcely audible amid the din of the jubilant chorus of the multitude.

The story of "She" tells of the queen of the land of the Amhaggar, a warlike race of swarthy cannibals, whose territory was confined within the great crater of an extinct volcano located in an unexplored section of the interior of Africa. The outsides of this mountain were too precipitous to be scaled even by wild animals. Their place of abode was therefore only accessible by a secret underground route familiar to but few of the race and totally unknown to the foreign world. Between the mountain and the sea there existed a deadly swamp that reeked with a poisonous atmosphere and was invested with repulsive and venomous reptiles. "She" was a woman of surprising beauty, who had attained the incredible age of 6,800 years at the time of appalling death. During her maidenhood she discovered the fountain of life, a flaming bath that possessed the great vital force of nature. In this living vapor she had bathed and the result was her perennial beauty was well nigh eternal life. Leo Vincey , her last adorer, was the sixty-eighth lineal descendant of Kallikrates, a former lover whom she had slain in the year 339 B. C., because he would not return her passion. It was Leo's extraordinary resemblance to the murdered man that led her to believe that Leo was but Kallikrates born over again. She sought to atone for the death she had visited upon Kallikrates, centuries ago, by claiming Leo for her spouse, and endeavoring to confer upon him, through the living bath, that almost immortality that she herself had acquired by the same means. But this ambition ended fatally to her, for the mysterious fire almost instantly shriveled up her form, obliterating her remarkable loveliness, and reduced her to the hideous condition of a mummy. Horace Holly had been Leo's guardian since the latter's fifth year. The boy's mother had been dead three years when his father, entrusting him to Holly's care, ended his own life by poison. The suicide bequeathed to Holly a strong iron box which was not to be opened until Leo had attained his twenty-fifth year. On that day the box was duly opened and the contents disclosed a curious ancient parchment bearing the record of sundry futile exertions on the part of Leo's ancestors, one after the other, to seek out the woman She, and slay her for killing Kallikrates, the original source of the family. But it was first essential to learn the secret of She's indefinite life. It was now Leo's turn to take up the avenging sword of the family name that generation after generation had hopelessly or else irresolutely handled or indifferently neglected. Forthwith Leo accepted the hallowed challenge that came to him from ages back, and persuaded his guardian to accompany him. They accordingly sailed from England to the African coast and then continued their journey in an Arabian dhow. The dhow was wrecked and its little crew and passengers were, by a singular coincidence, cast ashore on the very headland, bearing the huge face of a negro, referred to in the ancient parchment. The party were taken prisoners by a body of Amhaggar, and conveyed inland across the fatal swamp to the hidden land within the crater. After the succession of all ventures shown in the early part of the play, they are conducted before She. It was in the course of this judgement that she recognized in Leo the Kallikrates whose life she had so jealously sacrificed over 2,000 years ago. Here follows the love episode between She and Leo and the final incident of the fatal bath. The curtain falls on the death of She.