One Way of Putting It

He sits there. His head is thrown back; his eyes are raised to hers; his face is drawn and pointed as though he were suffering. He has sat there now some three years, and every night the hundreds of people assembled before him have suffered with him. His misery has not been without company. He is leaning upon something, no one knows upon what. Some have thought it a stone, some an altar; some have thought it a table and some a little hand organ. His sweetheart has a wreath of flowers about to crown him; he is looking up at her. When one realizes that he has had to look at her face for almost three years, one does not wonder that he is delicate and has to lean upon something. Many people have hated this youth, but he seems an object of pity rather than hatred. When one thinks of the ugly little imps beneath him who proudly show those three words of Latin, and the awful strains of that awful medley that have floated up to him year after year, we ought to have charity for him. We, thank heaven, can go out and forget the anatomy of the naiads in front of him and the impossible architecture back of him, but he, poor wretch, must 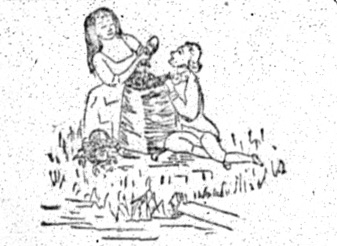 stay there always. And yet, it is not our fault that he is there, we would gladly dispense with him; we know of no good reason for his existing. Perhaps, when the world has found out which are Tintoretto's pictures and which are not, and when we discover what the frieze of the parthenon means, then we may also know why he sits there and upon what he is leaning.

The artist who painted the drop curtain in the beautiful Lansing theatre was unique. In art, to be unique is to be great. It is not every man who could paint so many yards of anatomy as are bathing in that weird fons vitalis and not have one square inch of beauty in it all. I do not know where one could turn to find ten such ugly women as the ten who are guilelessly disporting themselves in the middle of that picture. Without the nude art could not exist; but nudity is not necessarily artistic, nor is it the end of art. To paint draperies and ribbons may be frivolous, but to paint human flesh indifferently is desecration. One had better paint badly shaded draperies than badly shaped limbs. When an artist has no more beauty to show than Mr. Kettler exhibited in his naiads, he should veil his figures in something more substantial than mystery. In art, Apollo Belvidere is most proper nude, but Quasimodo must keep his clothes on.

It must have required an exceptional man to have painted so many pictures without once evincing the slightest knowledge of form or the slightest feeling for color. Mr. Fred Kettler has not even followed the lower French school; he was not even artist enough to make his naiads wicked; he has made them great, loosely stuffed, staring eyed, doll babies and one expects to see the sawdust come pouring out at any time.

There was and may be still just such a drop curtain in the new Boyd, but the manager had a neat little device of covering it up with a white canvas every night, until the oculists of Omaha bribed him not to cover the curtain any more, because times were hard and in Omaha people's eyes did not wear out fast enough in the natural way.

The men in red coats sigh and brace themselves for the struggle. They lift the battered brass instruments that are so old and dented one might think they had played for the original Light Brigade or sounded the charge of the Old Guard at Waterloo. But they didn't; they have never served any more martial purpose than to herald the arrival of Jo-Jo, the dog-faced man , or to conduct the Lilliputian queen through the streets and play sweet symphonies before the Wonderland musee. The men get their pieces in position and send forth a burst of music—minus its charms. Yes, it is the same strain we have heard these last five years; it has the same ambitiously high note and there is the same cracked, wheezing cornet that never reaches it. Every time, that cornet nerves itself hopefully, dashes ahead of the rest, leaps and grasps at the air; but it never gets anywhere. It has been leaping to reach that note every day for five years that I know of; it is strange that it does not grow weary of the utter futileness of its persuit. It is said that practice makes perfect; if so, this Wonderland band should long ere this have attained perfection. Strauss's orchestra could not practice more steadily and patiently, yet so far as one can tell they are not one whit nearer the right time than they were five years ago. And still we live and breathe and have our being.

It is a building on the corner of L and Eleventh streets, and it has been written up by a mightier hand than mine, but because I have had to look at it a great deal I desire to humbly express my wonder at it. It started out in life on a narrow scale, but when it grew to the second story it widened out and became twice as wide as its first story; then it repented of its expansion and narrowed again, narrower than ever. It has an overhanging balcony like old houses in Antwerp, and it has a facade which must have been modelled from the famous one in Venice. It has a very modern bay window and beside it a little diamond-paned window which might have been at home in old Puritan houses. The architecture is partly Roman and partly Gothic, and partly Greek and largely kinds that are not spoken of in books and were not eulogized by Ruskin . It is partially of brick and partially of wood, parts of it are painted one color and parts another. It don't look as though it had ever been built, it looks as though it had just happened. It not only has not unity, there is positive discord about it, it looks as though its members were warring together like Saint Paul's. Either the architect had gone mad or he needed the Keeley cure. Madame De Stael says that architecture is frozen music, if so then that building is the musee band congealed.

There is a lonely brown stone ruin on Fourteenth and P streets. It is not the relic of a lost civilization, its mutilation is not the work of Goths and Vandals, its future is entirely behind it, its history is already written in the great annals of the mortgage record in the county clerk's office. It is a monument not of blasted hopes or crushed ambitions, but of wind that went down and cheek that was smitten both upon the left and the right. The building has never grown beyond the first story, yet it is as complete as the builder thereof ever meant it to be; it has no roof, but the builder never intended it should have, he built it to be a ruin.

He built the building to help his credit and he built it on credit—credit which stopped at the first story. It is becoming quite an art in Lincoln to build ruins to boom credit. Some men have only had to dig foundations, but this gentleman had too large a past to bury in a foundation hole, so he really had to pile some bricks together. It is a strange thing to contemplate that a ruin should be built for ruin's sake and so fulfil its purpose. It is a degradation of architecture that must make the old architects restless in their graves. It is a thing that could have happened in just no other age or civilization or nation. In these times it is very much better to be born cheeky than rich.

It is a strange fact that people on the stage can't talk the English language like their fellow mortals. In these days there is a regular stage dialect, just as pronounced and set a dialect as any other. If in the real world anyone should gurgle the word "innocence" in the sensational actress manner, he or she would be sent to the first asylum that would risk receiving such a dangerous case. If any daughter should cry, "Me father!" in the fetching tone of the stage the frightened parent would most likely box his deluded darling's ears.

There is a peculiar difference in the way in which different actresses say the words "My God!" When Cora Tanner says them they are painfully suggestive of swearing; Margaret Mather says them daintily enough, but she is rather too conscious that she is saying them nicely; Edna May and Cecil Spooner shriek them as though the person addressed were deaf; Julia Marlowe says them very quietly, as though she did not want to say them at all and was trying to keep them back. Modjeska says them as Saint Ursula or Jeanne d'Arc might have said them, with wrapt belief and lofty conviction. It is as good as two or three sermons to hear the great Pole say those words. Clara Morris says them with terrible agony, like a woman in her extremity. Bernhardt says them—but who can say how Bernhardt does anything? But we think that the lips that speak must be a great deal naughtier than even those of the little Frenchwoman for the Deity to be wholly deaf when Bernhardt says "Mon Dieu!"

The most alert and observing, and certainly the most courageous and candid dramatic critics in Lincoln are the gods of the gallery. The actor has a right to be fond of the gallery folk and to get off his longest and most eloquent speeches for their benefit. They are always enthusiastic and always generous. If an actor repeats a noble sentiment, strikes a telling pose, they always applaud him. If he makes a pun they laugh at it just as though Noah had not rung a chestnut bell at that fun in his day. They are never cold and uncertain like the people down stairs, who are afraid of splitting their kid gloves if they applaud. They hold their breath when Monte Cristo makes his celebrated announcement concerning the world, and they are thrilled when Keene cries "Lay on, Macduff," in Richard III. just as much as if the lines belonged there. The gallery folks enjoy a play instead of analyzing it. Perhaps one reason the actors like the gallery so well is that it is largely filled with small boys and they furnish most of the enthusiasm and genuineness of the world anyhow. Yet, though the gallery is generous, it can also be terribly merciless, and when the gallery gods turn down their thumbs they never revoke their sentence of doom. Last Wednesday night the gallery rose nobly to the occasion. It found itself unable to endure the lovering part of Faust . The soul grew sick within it to see such protracted demonstrations of affection by a Faustus who would insist upon always keeping his mouth open and the guileless innocence of a Marguerite who was much older than Faust and more experienced in the ways of the world and who could doubtless have taught him many, many things. After the tenth minute of the twelfth embrace the gallery could stand it no longer, and those mighty ones who dwell on high began violently kissing each other, hundreds and hundreds of them. The reproach was unique and it could have been given by no one so effectively. The gallery deserves universal thanks.