OF Calvé's art it is quite impossible to speak briefly. The combination of a magnificent vocalist and an interpretative actress is so rare that it cannot be treated lightly or in a paragraph. But half of Emma Calvé's astonishing popularity is due neither to her voice nor to her art, wonderful as they are, but to a third element which, for lack of a better term, one must call her individuality—her personality. You see her as Carmen in her night-black hair; as Ophelia in ample golden locks; you see her as Santuzza in the head-dress of an Italian peasant, as Marguerite in the bodice of a German maiden. In every particular these creations differ absolutely, as only a great artist can differentiate; but the charm, the delight is always the same, for that quality is the personal quality—Calvé herself.

Public curiosity is continually fixed upon "home life" of artists. Now, Calvé's home is her dressing-room. She has a castle in the Cévennes, a house in Paris, an estate in Italy, but her dressing-room is her home. Or, to put it the other way, all her homes to her are dressing-rooms, and all the world's a stage and it is nothing else. She is always and every moment an actress and Calvé is the most wonderful role she plays. All her parts are tinctured with that one role "as the wine must taste of its own grapes."

If you have seen Calvé in concert, then you have seen her as she is. Were you to meet her in her own drawing-room once a week you would know her no better; you would find her quite as impetuous, as naively vain, as inexplicable and as much a creature of another world. She is by turns the most energetic and the most indolent of women. She never hurries; it is a physical impossibility with her. She is always late and is the despair of managers and rehearsals. She insists upon having two hours to dress before every performance, whereas other singers need only an hour at most. When she has a matinee performance, she goes to the theatre as soon as she gets up. She will never dress without two maids to assist her, and her companion, who reads aloud to her from the latest novel of Paul Bourget or M. Anatole France while she is being "made up." Occasionally Mademoiselle, la prima donna, breaks forth with a few bars from one of her arias and drowns not only the dainty phrases of M. France, but the noise of the scene shifting as well. Calvé has theories about heat drying up the lungs and ruining the voice, and she abominates American methods of heating. She is utterly impervious to cold, and in the dead of winter has the heat turned off in her dressing-room and keeps all the doors and windows wide open. Her maids, poor things! who have neither the Calvé temperament nor the fire of genius burning within 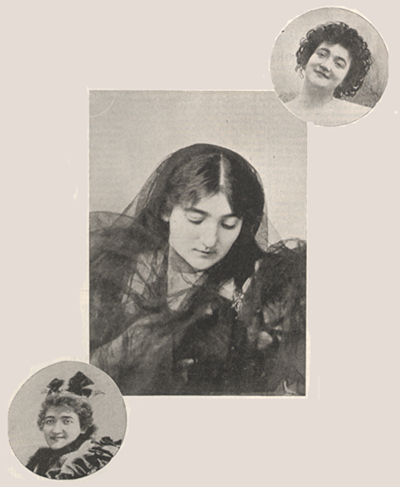 EMMA CALVE. them, are always wretchedly cold. She is genuinely sorry for them and kisses them quite affectionately, but they have tonsilitis just the same.

By her fellow artists Calvé is sincerely admired and feared, but few of them lead a placid existence near her. At the time of her notorious quarrel with Eames several seasons since, when the two singers were called before the curtain she simply would not take Eames' hand in the customary manner, but would toss her head and pout like a naughty child. Last winter in New York she sang at a benefit for the French Children's Hospital with M. Plançon, who had always been one of her most devoted admirers. As they strolled upon the stage a few moments before the performance began, Plançon noticed that the stage was quite filled with flowers that had been sent Calvé, and innocently remarked that their odor overpowered him and that he could not sing with so many flowers on the stage. The fair prima donna turning in fury upon the astonished basso informed him that if the flowers had been for him they would not trouble him, that she could endure his petty jealousy no longer and that she would not sing. Five minutes later she was discovered in the street, hatless and cloakless, in her low cut gown, shouting for a cab.

In spite of her little tempers, Mademoiselle is really one of the best hearted women in the world. She is always helping a young singer or two somewhere in her own country and she is passionately fond of children. In her case that much misused adverb is used advisedly, for it is quite impossible for her to be moderately fond. It seems that while she was at school at the Convent of the Sacred Heart, she promised some saint or other that if she ever became a singer she would do great things for God's poor. She believes implictly that her success came directly through divine agency and she has never forgotten her promise. On her great estate up in the Cévennes she has built an orphanage where she supports and educates forty little girls picked up from the slums of Paris. She has a warm feeling, too, for the ruddy-cheeked lads of her country and employs on her farm almost a hundred of them who find her a most delightful mistress. In the summer-time she always manages to get away to her mountain estate and become a farmer. She feeds her chickens, and rides a donkey, and milks her cows and entirely doffs the grand duchesse and becomes openly for the moment the sturdy peasant which she always will be at heart. She declares that when her voice fails her she will set up a chicken farm: that is really one of her cherished dreams. She loves to hunt eggs and save them, just as the old women of her mountains do. So much for the instincts of blood. "Ah," she once wrote to a friend, "Ah my sweet chickens! Surely View Image of Page 14 their's is a disinterested affection. Were I old and ugly and without a note in my throat they would still love me." Alas, Mademoiselle! but cease to feed your feathered devotees for awhile, and you will soon cry out that there is no faith left in chickens.

Calvé remembers old friends, even the little song, "The Star that I Love" in which she made her first success. She has scores of friends and manages to find time for them all. Whatever may be said of her, she is not a snob. She is often at home to a child when she is not to a duchess, and she visits the Children's Hospital in Paris more regularly than she does any of the drawing-rooms that are always open to her. Ellen Terry is one of her warmest friends, and the walls of Mademoiselle's house in Paris are quite covered with photographs of the English tragedienne. One of them bears this neat inscription, "One lesson in English I will give you—'I love you'—that is all. Ellen Terry." Most of Calvé's lessons in English have been to that effect.