The Great Woman Editor of
Paris. 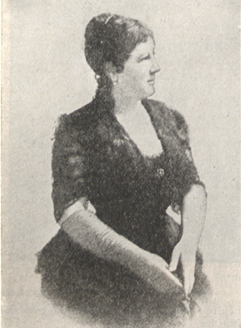 MME. JULIETTE ADAM.
(Editor of the "Nouvelle Revue.) States, one of the most daring and influential journals of Paris, and that of course means of France, was founded, controlled and edited by a woman, Mme. Juliette Adam.

Some one once put it that Mme. Adam is the only man in France, but that is only the French way of saying that she has a man's head on her square, strong shoulders, that she does a man's work in a manly way and has been the friend and confidant of the greatest men Paris has produced in the last quarter of a century.

Madame Adam was born at Verberel, France, in 1836. Her maiden name was Juliette Lamber. When still very young she married, or rather, in the usual French manner, was married to M. La Messine. Her first marriage was not a happy one. She left her husband and went to Paris under the protection of George Sand, who had a fashion of protecting everybody and everything that came within her reach, whether they would or no. George Sand divined that the young woman had rare literary talent, and in her usual warm-hearted generosity set about encouraging and developing it. For beside writing some ninety odd volumes of the best literature of France, George Sand probably made and helped more literary people than any one of her glorious generation. There was scarcely an author in Paris who did not draw some vital inspiration from her powerful and fecund mentality. Mme. La Messine's first book was a protest against the position of women in society. The "woman movement" began, like most things, in Paris, and the question of women's place in public life was pretty well settled there before it was even agitated across the channel.

But social questions were not to be Juliette Lamber's especial work. As soon as she began to be recognized as a central figure in the drawing-rooms of Paris and to meet the foremost statesmen of France, she found her proper sphere—politics. Then came her celebrated friendship with Gambetta, which was the making of Mme. Adam. Gambetta said he had found no mind in all France so keen and acute in comprehending the innumerable complications of politics, and that he "meant to make her master the political situation in France as only one man had done." The "one man" of course was himself. Excessive modesty was never one of Gambetta's vices. He accomplished his project. Mme. Adam is perhaps the only woman alive to-day who is an active power in national politics, and whose opinions on political subjects are quoted and respected by men. Her office is headquarters for politicians and diplomats of all nations, and her paragraphs on new issues are read eagerly throughout France.

After her divorce from M. Messine she married M. Edmond Adam, then Prefect of Police. At the time of his death in 1877 M. Adam was a Senator, and among all his wife's admirers and friends no one had a more profound respect for her judgment on public questions than he. He repeatedly declared that but for her he would have made a poor figure in politics. A woman who succeeds in convincing her husband of her intelligence has performed even a more difficult task than the man who convinces his valet that he is a hero.

In 1879 Mme. Adam founded the Nouvelle Revue, which is now one of the leading journals of Paris. From the first she has been its sole editor and has completely controlled the policy of the periodical. In literature as well as in politics her influence has been more deeply felt than that of any other woman in France. She has introduced to the world several men who are now ranked among the great authors of France. Among them Pierre Loti whose admirable ' Iceland Fisherman" has been translated into all the European languages and is one of the most sought for books in our public 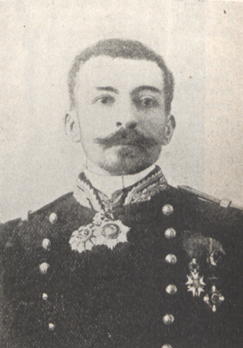 PIERRE LOTI.
(The famous author of "An Iceland Fisherman,"
whose work first received recognition through
Mme. Adam and her publication.) libraries. Alphonse Daudet is among her most intimate friends, and before he begins work upon a new novel they usually discuss the general plan of it together.

Stuart Henry says that Mme. Adam's editorial rooms remind him more of a New York business office than any others in Paris. As a rule Parisian editors are rather fanciful about their offices, and furnish them elaborately with statuettes and tapestries and etchings and editions de luxe until they resemble the green room of a theatre. But Mme. Adam's walls are bare except for a few lithographs of Bourget, Loti, Heredia, and a number of maps. Her desk is without ornament, but thoroughly equipped for business. Her clerks and staff stand in absolute awe of her, and when she is displeased she does not hesitate to call them "imbeciles." There it is that this tall, square shouldered woman, this Amazon of the quill, with her ruddy countenance, her hair just turning gray and her blue eyes, that have grown sharp and keen from judging men and measures, works, daily advocating or denouncing movements that are of vital moment to the nation. When one of her friends drops in she talks, clearly and convincingly, often eloquently, but usually upon the one subject to the study of which she has given the strength of her intellect and the devotion of her strangely vigorous personality, France: the France of the past, the France of the present, the France of the future, which she believes will be greater than even in the golden age of Louis XIV and supreme among the nations.