Adventurous Young Swede, Who Made Trip Long Ago, Wrote Book to Describe It.

Journey Now Easy and Spell Cast by Remains of Forgotten Race Is Potent. 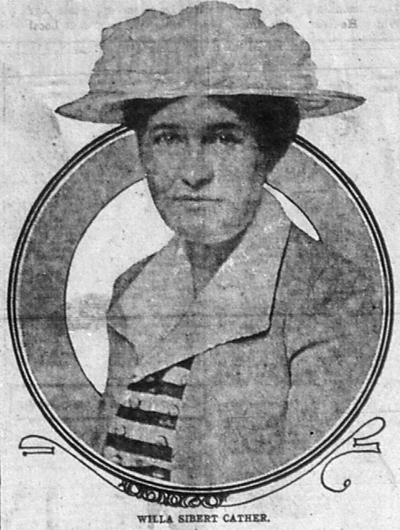 TWENTY-FIVE years ago an adventurous young Swede, the Baron Nordenskjold, started on a trip around the world, sailing westward. When he got to Denver he heard rumors about certain cliff dweller remains that had been found in the extreme southwest corner of Colorado. He went down to the Mesa Verde and got no farther on his trip around the world. He stayed on the mesa for some months and then went back to Stockholm and wrote and published the book which first made the Mesa Verde known to the world. Later the book was translated but the English edition also was published in Stockholm. There is no American edition.

The journey to the Mesa Verde, which was a hard one in Nordenskjold's time, is now a very easy one, and the railway runs within thirty miles of the mesa. You leave Denver in the evening, over the Denver & Rio Grande. From the time when your train crawls out of La Veta pass at about 4 in the morning, until you reach Durango at nightfall, there is not a dull moment. All day you are among high mountains, swinging back and forth between Colorado and New Mexico, with the Sangre de Cristo and the Culebra ranges always in sight until you cross the continental divide at Cumbres and begin the wild scurry down the westward slope.

That particular branch of the Denver & Rio Grande is called the Whiplash, and most of the way you can signal to the engineer from the rear car. You stay all night at Durango. In the morning you take another train for Mancos; a friendly train with invariably friendly passengers and a conductor who has been on that run for fourteen years and who can give you all sorts of helpful information. When you reach Mancos you find the station agent, the hotel people and the camp outfitters quite as cordial as the train crew. Your business transactions become of minor importance, and before you know it you are staying on in Mancos because you like the people.

I EXPECTED to find Mancos a railway station and had planned to stay one night there. I stayed in all six days. The town lies at the foot of the La Plata (Silver) mountains, in a richly-irrigated valley. The Mancos river, clear as glass and bordered with poplars and water willows, runs thru the middle of the town. The streets are lined with trees, the yards are a riot of giant sage and Indian paintbrush, shaded with cedars; the wheat fields are veritable cloth of gold and the whole town is buried in sweet clover. It grows in tall hedges along the water ditches and in the low ground along the river. Not once while I was in Mancos, indoors or out, was there a moment when I could not smell the sweet clover.

From the streets of Mancos and from the hills about it one can always see the green mesa—not green at that distance but a darkish purple, a rather grim mass bulking up in the West. It sits like a cheese box in the plain, the deep canons with which it is slashed imperceptible from far away. The mesa is forty-five miles long and twenty-five wide, and its sides are so steep that it is accessible from only one point. The government wagon road is recent. Until within a few years there was only a difficult horse trail. Charles Kelly, who now takes travelers out to the mesa by wagon or motor, is the same guide who formerly provided mounts and provisions and pack horses for people who came to see ruins on the mesa. There is now a very comfortable tent camp on the mesa, just above the fine spring at Spruce Tree house, and the wife of the forest ranger provides excellent food. Anyone can be very comfortable there for several weeks.

ANY approach to the Mesa Verde is impressive, but one must always think with envy of the entrada of Richard Wetherill, the first white man who discovered the ruins in its canons forty-odd years ago. Until that time the mesa was entirely unexplored, and was known only as a troublesome place into which cattle wandered off, and from which they never came back. All the country about it was open range. The Wetherills had a ranch west of Mancos. One December day a boy brought word to the ranch house that a bunch of cattle had got away and gone up into the mesa. The same thing had happened before, and young Richard Wetherill said that this time he was going after his beasts. He rode off with one of his cow men and they entered the mesa by a deep canon from the Mancos river, which flows at its base. They followed the canon toward the heart of the mesa until they could go no farther with horses. They tied their mounts and went on foot up a side canon, now called Cliff canon. After a long stretch of hard climbing young Wetherill happened to glance up at the great cliffs above him, and there, thru a veil of lightly falling snow, he saw practically as it stands today and as it had stood for 800 years before, the cliff palace—not a cliff dwelling, but a cliff village; houses, courts, terraces and towers, a place large enough to house 300 people, lying in a natural archway let back into the cliff. It stood as if it had been deserted yesterday; undisturbed and undesecrated, preserved by the dry atmosphere and by its great inacessibility.

That is what the Mesa Verde means; its ruins are the highest achievement of stone-age man—preserved in bright, dry sunshine, like a fly in amber—sheltered by great canon walls and hidden away in a difficult mesa into which no one had ever found a trail. When Wetherill rode in after his cattle no later civilization blurred the outlines there. Life had been extinct upon the mesa since the days of the Cliff Dwellers. Not only their buildings, but their pottery, linen cloth, feather cloth, sandals, stone and bone tools, dried pumpkins, corn and onions, remained as they had been left. There were even a few well-preserved mummies—not many, for the cliff dwellers cremated their dead.

ALTHO only three groups of buildings have been excavated and made easily accessible to travelers, there are ruins everywhere—perched about like swallows' nests. The whole mesa, indeed, is one vast ruin. Eight hundred years ago the mesa was hung with villages, as the hills above Amalfi are today. There must have been about 10,000 people living there. The villages were all built back in these gracious natural arches in the cliffs; with such an outlook, such a setting as men have never found for their dwellings anywhere else in the world. The architecture is like that of most southern countries—of Palestine, northern Africa, southern Spain—absolutely harmonious with its site and setting. On the way from New York to the Montezuma valley one goes thru hundreds of ugly little American towns, but when you once reach the mesa, all that is behind you. The stone villages in the cliff arches are a successful evasion of ugliness—perhaps an indolent evasion. Color, simplicity, space, an absence of clutter, the houses of the Pueblo Indians today and of their ancestors on the Mesa Verde are a reproach to the messiness in which we live.

Everything in the cliff dweller villages points to a tempered, settled, ritualistic life, where generations went on gravely and reverently repeating the past, rather than bathing for anything new. Their lives were so full of ritual and symbolism that all their common actions were ceremonial—planting, harvesting, hunting, feasting, fasting. The great drama of the weather and the seasons occupied their minds a good deal, and they seem to have ordered their behavior according to the moon and sun and stars. The windows in the towers were arranged with regard for astronomical observations. Their strong habitations, their settled mode of living, their satisfying ritual, seem to have made this people conservative and aristocratic. The most plausible theory as to their extinction is that the dwellers on the Mesa Verde were routed and driven out by their vulgar, pushing neighbors of the plains, who were less comfortable, less satisfied, and consequently more energetic.

The mesa people may have been somewhat enslaved by their strongholds, and their temper may have been softened by their comparative comfort and their attention to order and detail. They worked out a mode of life which satisfied them, and they were absolutely unenterprising in the modern American sense. Their architecture and their religion were their national purpose. Their religion was largely a personal recognition and interpretation of nature. They seem not to have struggled to overcome their environment. They accommodated themselves to it, interpreted it and made it personal; lived in a dignified relation with it. In more senses than one they built themselves into it. They lived by hurrying and concentrating natural conditions and processes just a little. They supplemented the rainfall by building reservoirs and irrigating. House building, in those great natural arches of stone, was but carrying out a suggestion that stared them in the face; often they used a great rock that had fallen down into the archway as a cornerstone and anchor for their own lighter masonry. When they felled cedars with stone axes they were but accelerating a natural process; the ends of their roof rafters looked as if they had been gnawed thru by a beaver.

DR. JOHNSON declared that man is an historical animal. Certainly it is the human record, however slight, that stirs us most deeply, and a country without such a record is dumb, no matter how beautiful. The Mesa Verde is not, as many people think, an inconveniently situated museum. It is the story of an early race, of the social and religious life of a people indigenous to that soil and to its rocky splendors. It is the human expression of that land of sharp contours, brutal contrasts, glorious color and blinding light. The human consciousness, as we know it today, dwelt there, and a feeling for beauty and order was certainly not absent. There are in those stone villages no suggestions revolting to our sensibilities. No sinister ideas lurk in the sun-drenched ruins hung among the crags. One has only to go down into Hopiland to find the same life going on today on other mesa tops; houses like these, kivas like these, ceremonial and religious implements like these—every detail preserved with the utmost fidelity. When you see those ancient, pyramidal pueblos once more brought nearer by the sunset light that beats on them like gold-beaters' hammers, when the aromatic pinon smoke begins to curl up in the still air and the boys bring in the cattle and the old Indians come out in their white burnouses and take their accustomed grave positions upon the housetops, you begin to feel that custom, ritual, integrity of tradition have a reality that goes deeper than the bustling business of the world.