"No, Antone, I have told thee many times, no, thou shalt not sell it until I am gone."

"But I need money; what good is that old fiddle to thee? The very crows laugh at thee when thou art trying to play. Thy hand trembles so thou canst scarce hold the bow. Thou shalt go with me to the Blue to cut wood to-morrow. See to it thou art up early."

"What, on the Sabbath, Antone, when it is so cold? I get so very cold, my son, let us not go to-morrow."

"Yes, to-morrow, thou lazy old man. Do not I cut wood upon the Sabbath? Care I how cold it is? Wood thou shalt cut, and haul it too, and as for the fiddle, I tell thee I will sell it yet." Antone pulled his ragged cap down over his low heavy brow, and went out. The old man drew his stool up nearer the fire, and sat stroking his violin with trembling fingers and muttering, "Not while I live, not while I live."

Five years ago they had come here, Peter Sadelack, and his wife, and oldest son Antone, and countless smaller Sadelacks, here to southwestern Nebraska, and had taken up a homestead. Antone was the acknowledged master of the premises, and people said he was a likely youth, and would do well. That he was mean and untrustworthy every one knew, but that made little difference. His corn was better tended than any in the county, and his wheat always yielded more than other men's.

Of Peter no one knew much, nor had any one a good word to say for him. He drank whenever he could get out of Antone's sight long enough to pawn his hat or coat for whisky. Indeed there were but two things he would not pawn, his pipe and his violin. He was a lazy, absent-minded old fellow, who liked to fiddle better than to plow, though Antone surely got work enough out of them all, for that matter. In the house of which Antone was master there was no one, from the little boy three years old, to the old man of sixty, who did not earn his bread. Still people said that Peter was worthless, and was a great drag on Antone, his son, who never drank, and was a much better man than his father had ever been. Peter did not care what people said. He did not like the country, nor the people, least of all he liked the plowing. He was very homesick for Bohemia. Long ago, only eight years ago by the calendar, but it seemed eight centuries to Peter, he had been a second violinist in the great theatre at Prague. He had gone INto the theatre veryView Image of Page 11young, and had been there all his life, until he had a stroke of paralysis, which made his arm so weak that his bowing was uncertain. Then they told him he could go. Those were great days at the theatre. He had plenty to drink then, and wore a dress coat every evening, and there were always parties after the play. He could play in those days, ay, that he could! He could never read the notes well, so he did not play first; but his touch, he had a touch indeed, so Herr Mikilsdoff, who led the orchestra, had said. Sometimes now Peter thought he could plow better if he could only bow as he used to. He had seen all the lovely women in the world there, all the great singers and the great players. He was in the orchestra when Rachel played, and he heard Liszt play when the Countess d'Agoult sat in the stage box and threw the master white lillies. Once, a French woman came and played for weeks, he did not remember her name now. He did not remember her face very well either, for it changed so, it was never twice the same. But the beauty of it, and the great hunger men felt at the sight of it, that he remembered. Most of all he remembered her voice. He did not know French, and could not understand a word she said, but it seemed to him that she must be talking the music of Chopin. And her voice, he thought he should know that in the other world. The last night she played a play in which a man touched her arm, and she stabbed him. As Peter sat among the smoking gas jets down below the footlights with his fiddle on his knee, and looked up at her, he thought he would like to die, too, if he could touch her arm once, and have her stab him so. Peter went home to his wife very drunk that night. Even in those days he was a foolish fellow, who cared for nothing but music and pretty faces.

It was all different now. He had nothing to drink and little to eat, and here, there was nothing but sun, and grass, and sky. He had forgotten almost everything, but some things he remembered well enough. He loved his violin and the holy Mary, and above all else he feared the Evil One, and his son Antone.

The fire was low, and it grew cold. Still Peter sat by the fire remembering. He dared not throw more cobs on the fire; Antone would be angry. He did not want to cut wood to-morrow, it would be Sunday, and he wanted to go to mass. Antone might let him do that. He held his violin under his wrinkled chin, his white hair fell over it, and he began to play "Ave Maria." His hand shook more than ever before, and at last refused to work the bow at all. He sat stupefied for awhile, then arose, and taking his violin with him, stole out into the old sod stable. He took Antone's shot-gun down from its peg, and loaded it by the moonlight which streamed in through the door. He sat down on the dirt floor, and leaned back against the dirt wall. He heard the wolves howling in the distance, and the night wind screaming as it swept over the snow. Near him he heard the regular breathing of the horses in the dark. He put his crucifix above his heart, and folding his hands said brokenly all the Latin he had ever known, "Pater noster, qui in cœlum est." Then he raised his head and sighed, "Not one kreutzer will Antone pay them to pray for my soul, not one kreutzer, he is so careful of his money, is Antone; he does not waste it in drink, he is a better man than I, but hard sometimes; he works the girls too hard; women were not made to work so; but he shall not sell thee, my fiddle, I can play thee no more, but they shall not part us; we have seen it all together, and we will forget it together, the French woman and all." He held his fiddle under his chin a moment, where it had lain so often, then put it across his knee and broke it through the middle. He pulled off his old boot, held the gun between his knees with the muzzle against his forehead, and pressed the trigger with his toe.

In the morning Antone found him stiff, frozen fast in a pool of blood. They could not straighten him out enough to fit a coffin,View Image of Page 12so they buried him in a pine box. Before the funeral Antone carried to town the fiddle-bow which Peter had forgotten to break. Antone was very thrifty, and a better man than his father had been. 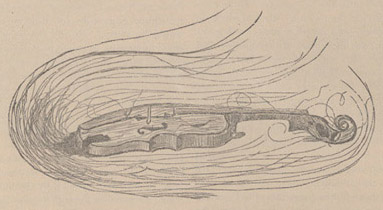