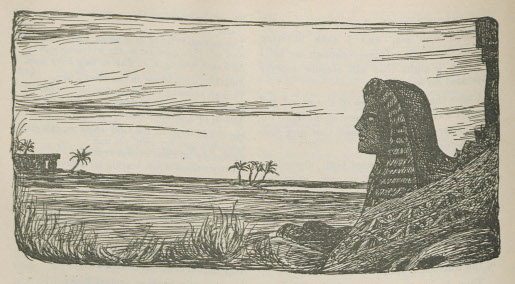 A TALE OF THE WHITE PYRAMID.

As I drew near the city the sun hung hot over the valley which wound like a green thread toward the south. On either side the river lay the fields of grain, and beyond was the desert of yellow sand which stretched away to where the low line of Libian hills rose against the sky. The heat was very great, and the breeze scarce stirred the reeds which grew in the black mud down where the Nile, like a great tawny serpent, crept lazily away through the desert. Memphis stood as silent as the judgment hall of Osiris. The shops and even the temples were deserted, and no man stirred in the streets save the watchmen of the city. Early in the morning the people had arisen and washed the ashes from their faces, shaved their bodies, taken off the robes of mourning, and had gone out into the plain, for the seventy-two days of mourning were now over.

Senefrau the first, Lord of the Light and Ruler of the Upper and Lower Kingdoms, was dead and gathered unto his fathers. His body had passed into the hands of the embalmers, and lain for the allotted seventy days in niter, and had been wrapped in gums and spices and white linen and placed in a golden mummy case, and to-day it was to be placed in the stone sarcophagus in the white pyramid, where it was to await its soul.

Early in the morning, when I came unto the house of my uncle, he took me in his chariot and drove out of the city into the great plain which is north of the city, where the pyramid stood. The great plain was covered with a multitude of men. There all the men of the city were gathered together, and men from all over the land of Khem. Here and there were tethered many horses and camels of those who had come from afar. The army was there, and the priesthood, and men of all ranks; slaves, and swineherds, and the princes of the people. At the head of the army stood a tall dark man in a chariot of ivory and gold, speaking with a youth who stood beside the chariot.

"It is Kufu, the king," said Rui, "menView Image of Page 9 say that before the Nile rises again he will begin to build a pyramid, and that it will be such a one as men have never seen before, nor shall we afterwards."

"Who is he that stands near unto the king, and with whom the king speaks?" I asked. Then there came a cloud upon the face of Rui, the brother of my father, and he answered and said unto me:

"He is a youth of the Shepherd people of the north, he is a builder and has worked upon the tomb. He is cunning of hand and wise of heart, and Kufu has shown him great favor, but the people like him not, for he is of the blood of strangers."

I spoke no more of the youth, for I saw that Rui liked him not, but my eyes were upon him continually, for I had seen no other man like unto him for beauty of face or of form.

After a time it came to pass that the great tumult ceased throughout the plain, and the words of men died upon their lips. Up from the shore of the sacred lake wound the funeral procession toward the tomb, and by the Lord of Truth I then thought the glory of Isis could be no grander. There were boys clad in white and wreathed with lotus flowers, and thousands of slaves clad in the skins of leopards, bearing bread and wine and oil, and carrying the images of the gods. There were maidens, bands of harpers and of musicians, and the captives which the king had taken in war leading tigers and lions of the desert. There was the sacred ark drawn by twenty white oxen, and there were many priests, and the guards of the king, and the sacred body of Senefrau, borne by carriers. After the body of the king came all the women of his household, beating their hearts, and weeping bitterly. As the train approached men fell upon their faces and prayed to Pthahah, the Great South Wall, and Kufu bowed his head. At the foot of the pyramid the train halted, and the youths clothed in white, and the priests, and those who bore the body began to ascend the pyramid, singing as they went: "Enter into thy rest, oh Pharaoh! "Enter into thy kingdom. "For the crown of the two lands was heavy, "And thy head was old, "And thou hast laid it aside forever. "Thy two arms were weak, "And the scepter was a great weight, "And thou hast put it from thee. "Enter thou into thy new reign, "Longer than the eternities. "Darkness shall be thy realm, O King, "And sleep thy minion. "The chariots of Ethiopia shall surround thee no more, "Nor the multitudes of the mighty encompass thee in battle, "For thou, being dead, art become as a god; "Good thou knowest, oh king; "And evil has been nigh unto thee, "Yet neither approach thee now, "For thou art dead, and like unto the gods."

They bore him down into the pyramid, and left him to sleep, and to wait. Then I saw a multitude of men gather about a great white stone that lay at the base of the tomb, and I questioned Rui concerning it, and he answered me:

"This pyramid as thou seest opens not at the side, but from the top down. That great slab of stone is to cover the top of the tomb. See, even now the workmen spread mortar upon the top of the tomb, and fasten ropes about the great stone to lift it into place. Neith grant that they harm not the stone, for it has taken a thousand men ten years to cut and polish it and to bring it thither."

I saw slaves bending over the great stone, fastening about it ropes which hung from the great pulleys built upon the shafts which rose from the upper stage of the pyramid. While they did this, companies of slaves began to ascend the sides of the tomb, each company with its master. The men were all fashioned like the men of the north, and their strength was like ribbed steel, for these were the mightiest men in Egypt. After a time there was silence in the plain. The slaves took hold of the ropes that swung from the pulleys, and every voice was hushed. It was as still without the pyramid as it was within. At last the sound of the Sistrum broke the stillness, the master builders waved their lashes, and the twoView Image of Page 10 thousand slaves who were upon the pyramid set their feet firmly upon the polished stone and threw the weight of their bodies upon the ropes. Slowly, slowly, amid the creaking and groaning of the ropes, the great stone left the earth. The musicians played and the people shouted, for never before in all Egypt had so great a stone been raised. But suddenly the shouting ceased, and the music was hushed, and a stillness like the sleep of Nut fell over the plain. All the people gazed upward, and the heart of Khem grew sick as they looked. The great stone had risen halfway, the lifting ropes were firm as the pillars of heaven, but one of the ropes which held the stone in place gave way and stretched, and the great stone which was the pride of the land, was settling at one end and slipping from its fastenings. The slaves crouched upon the pyramid, the builders spoke no word, and the people turned their eyes from the stone, that they might not see it fall. As I looked up, I saw a man running rapidly along the tier of the pyramid opposite the rocking stone. I knew his face to be the face of the stranger whom I saw speaking with the king. He threw off his garments as he ran, and at the edge of the stone tier he paused for a moment, he crouched low, gathering all his strength, then suddenly straightening his body he threw back his head and shot straight forward, like an arrow shot from the bow, over eighteen cubits, and fell lightly upon his feet on the uppermost end of the stone. He stood with both hands clenched at his side, his right foot a little before his left, erect and fair as the statue of Houris, watching the farther end of the stone. For a little the stone stood still, then swung back and lay evenly as when all was well, and then the end upon which the youth stood, sank. He thrust his right foot further forward, his toes clinging to the polished stone, and clasping his hands about his waist above the hips, slowly bowed his great frame forward. The stone slab felt its master and swung slowly back, and again the end on which the youth stood was uppermost. So he stood, his dusky limbs showing clear against the white stone, his every muscle quivering, the sweat pouring from his body, swaying the great stone. The great white desert seemed to rock and sway, the sun grew hotter and stood still in heaven, the sky and the sea of faces seemed to whirl and reel, then blend into one awful face, grinning horribly. The slaves, not daring to breathe, crouched upon the tomb, the multitude stood still and gazed upward, and earth and heaven and men were as dumb as if the gods had smitten them mad with thunder. Then a great cry rang out:

"In the name of Ptahah and of your fathers' souls, pull!"

It was the voice of Kufu. Slowly, like men awakened from a dream, the slaves drew up that swinging stone, and he that stood upon it. Below the king stood, his hands clutching the front of his chariot, and his eyes strained upon the stone. When the slab reached the top of the shaft on which the pulley hung, it was swung back over the pyramid, and the descent began. The slaves, sick with fear, lost control of it, and the great stone plunged down faster and faster. I wondered if the mortar spread upon the top was thick enough to break its fall. Just as it struck the top in safety, he who stood upon it, gathering all his strength leaped high into the air to break the shock and fell motionless upon the stone. Then such a cry as went up, never before roused old Nilus from his dreams, or made the walls of the city to tremble. They bore him down from the tomb and placed him in the chariot of the king. Then the king's trumpeter sounded, and then Kufu spake:

"We have this day seen a deed the like of which we have never seen before, neither have our fathers told us of such a thing. Know, men of Egypt that he, the Shepherd stranger, who has risen upon the swinging stone, shall build the great pyramid, for he is worthy in my sight. The king has said."

Then the people cheered, but their faces were dark. And the charioteer of the kingView Image of Page 11 lashed his horses across the plain toward the city.

Of the great pyramid and of the mystery thereof, and of the strange builder, and of the sin of the king, I may not speak, for my lips are sealed.